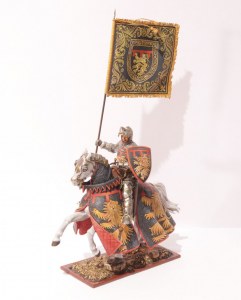 Sir Bernard Brocas was a close friend of Edward the Black Prince and a commander of forces in the Battle of Crecy and subsequent campaigns in France during the Hundred Years War.
Born in 1330 the son of Sir John Brocas of Clewer in Berkshire England. Due to a rebuilding of Windsor Castle, Bernard grew up in the company of Edward, the son of King Edward III.
In the company of Edward the Black Prince, Brocas fought in the Battles of Poitiers, Crecy and Najera.
Following service in the Hundred Years War Brocas held many responsible many responsible positions in government which included:
• Queens Chamberlain to Anne of Bohemia
• High Sheriff of Wiltshire
• M.P. for Wiltshire
• M.P. for Hampshire
Brocas died in 1395 and was buried in St. Edmunds Chapel in Westminster Abbey where his effigy can be seen today.