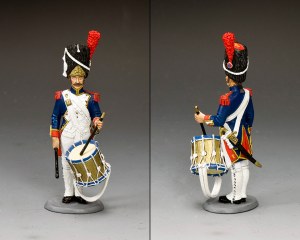 Here’s a neat and colourful little set of seven Napoleonic musicians from the Emperor’s own Imperial Guard better known as ‘The Old Guard’, possibly the most prestigious formation of Napoleon’s ‘Grande Armee’.

Famously devoted to their Emperor, he even referred to them as ‘my children’, the members of the ‘Old Guard’ were specially selected based on their physical traits, most notably, above average height and previous military experience and battlefield bravery.

Similarly the musicians accepted into the regiment had to be of proven musical ability and meet the same physical requirements. The sole exceptions were the young boy musicians who were often orphans or teenage children of serving Guardsmen who were trained by their elder fellow band members.

This seven-figure set includes the decoratively dressed Drum Major wearing the be-plumed bicorne alongwith TWO adult side drummers and ONE younger drummer. Alongside them are TWO more ‘Old Guard’ fifers and a junior fifer.

The seven-figure set comes in its own special box with a decorative full colour label.