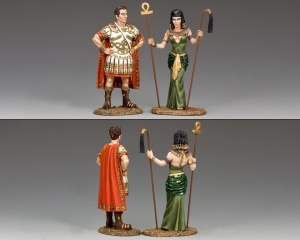 Marcus Antonius, more commonly known in English as Mark or Marc Antony. A powerful Roman politician and general and a staunch ally of Julius Caesar.

Following Caesar’s death he was involved in a power struggle with Caesar’s successor Octavian (later to be called Augustus). Although married to Octavian’s sister he carried on an affair with the Egyptian queen Cleopatra who bore him 3 children.

Eventually Mark Antony and Octavian’s mutual hostility erupted into Civil War and Antony fled to Egypt after his army was defeated at the Battle of Actium. Shortly thereafter the lovers committed suicide.

Cleopatra, the Queen of the Nile and the lover of Mark Antony. She was also the last pharaoh of the Ptolemaic line of Egyptian rulers. These were all descended from Ptolemy, one of Alexander the Great’s generals.

Her first Roman paramour was Julius Caesar himself and by him she had a son Caesarion. After Caesar’s assassination she aligned herself with Mark Antony. Following Antony’s suicide she also killed herself.

The K&C figure draws on several influences for its design most notably, the 1963 “Cleopatra” movie