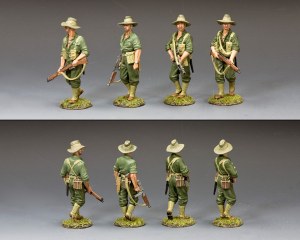 y the middle of 1942 Japan’s empire extended in depth across vast tracts of China, the Pacific and Southeast Asia. During the six months after the attack on Pearl Harbor, Hong Kong had fallen, rapidly followed by Malaya and Singapore, then the Philippines and finally, the Dutch East Indies.
Now the Japanese stood poised to attack Australia’s territory in New Guinea, just one hundred miles north of the great southern continent.
With New Guinea as a forward base Japan’s navy and airforce could attack Australia, threaten its link to America and also act as a ‘shield’ to protect its newly-acquired Dutch East Indies.
Beginning in March 1942 the Japanese had already landed at various points on the north coast of New Guinea and started to advance towards the key objective, Port Moresby, the territory’s capital and main port.
In May 1942 however, the Battle of the Coral Sea thwarted an additional Japanese plan to launch an amphibious assault directly on the port.
The main effort now would be an overland thrust south westwards along the Kokoda Trail (or track) running across the rugged Owen Stanley Mountains via the native village of Kokoda.
At this time, the island’s Australian commander mistakenly believed the Trail was impassable for large-scale troop movements and the Japanese only encountered minimal resistance from a small force of New Guinea volunteers.
By the end of July 1942 the Japanese had captured Kokoda and brought almost 14,000 battle-hardened troops into action.