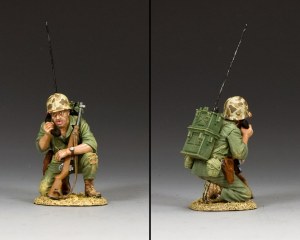 USMC012 ‘Marine Radioman’ is not presently in stock.
Please complete the form below to be notified when stock arrives:

The beginning of a new range is always an exciting and challenging time for all of us at King & Country... Will the collectors like it... ? Does it have ‘Legs’...?

Very importantly, will it sell...?

In this particular case we’re quietly confident that these all-new United States Marines will find a ready and eager market and a ‘special-place’ in many K&C collections.

This is K&C’s Third ‘landing’ of U.S. Marine ‘Leathernecks’ in action.

Our first 2 x releases, back in the late 1990’s and 2005 focused on the epic battle of IWD JIMA, immortalized in both countless books and several major motion pictures.

This time we are producing a ‘prequel’, a battle that was, in its own way, just as bloody and bitterly fought... TARAWA.

The Battle of TARAWA was fought between 20-23 November 1943 and was part of the U.S. invasion of the Gilbert Islands in the central Pacific region.

Although not the first time U.S. forces had met the Japanese in battle it was the first time they had faced serious opposition to an amphibious landing.

On the tiny Tarawa Atoll more than 4,500 Japanese defenders were well-supplied and expertly dug-in and fought virtually to the last man.

Opposing them were the men of the 2nd Marine Division, U.S.M.C., some of America’s toughest and best fighting forces.

Of approximately 12,000 Marines who assaulted Tarawa 3,146 became casualties with almost 1,000 killed and over 2,000 wounded.  That was the deadly toll of just 76 hours of bloody, brutal, non-stop combat.

K&C are proud to launch an initial first wave of 7 fighting Marines in dramatic, dynamic action poses many more are on the way including a magnificent looking LVT(A)-1 ‘Alligator’.

All of our ‘Leathernecks’ have shed their backpacks and are equipped with a mixture of weapons... the M1 ‘Garand’ rifle, the Thompson SubMachine Gun the M1 Carbine, the 1911 Colt Automatic Pistol and a Flame Thrower.