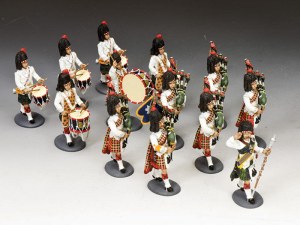 Notice: Just 100 sets of this ‘1997’ edition are being released in their own Special Presentation Box.

25 years ago, on the last day of June 1997, the former British Crown Colony of Hong Kong was ceremoniously handed back to the Peoples’ Republic of China.  On that evening, in what could be seen as the very last day of the once great British Empire, the ‘Union Jack’ was lowered and the red flag raised over this amazing city that l’ve proudly called home for the last 45 years!  Among the U.K. armed forces on parade that night was the last British Army regiment to be stationed in Hong Kong… the 1st Battalion, The Black Watch.  One of the oldest infantry regiments in the Army and with one of its finest battlefield reputations the ‘Watch’ wore their traditional kilts together with the ‘Tropical Parade Dress’ tunics in white.  This new version of our Regimental 13 piece ‘Pipes & Drums’ are uniformed as they were on that historic last parade on the evening of June 30, 1997.  Today the ‘Black Watch’ have been amalgamated into the much larger Royal Regiment of Scotland and form this new unit’s Third Battalion.